Building a Reconstruction of a 16th Century Shoe - Part 2

With the upper complete, the insole is cut out and prepared for sewing. The insole is pierced with an awl all the way around flesh to edge at an even distance from the sole's edge. It is then fixed to the last with three nails. The two cutoffs of the 3 piece last (shown earlier) I have fixed to the last with a bit of non too robust sticky tape in order to wedge it free later on when I want to remove the last again. As I said, I am not aware of any actual finds of lasts of that period, nor of a detailed description of the lasting process in use at that time, so this construction is guesswork on my side. 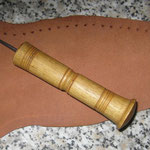 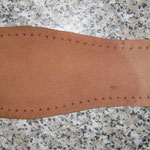 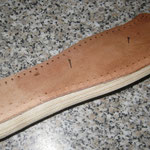 With the insole made fast the upper can be put on the last. Here again I have no detailed information what was the standard procedure (if there was any in the first place).

Basically two ways come to mind - since I cut the pattern out generously I decided to pull the surplus of the upper around the edge of the insole and fix it to its underside in a manner similar to modern shoemaking or as was done with Roman period shoes.

Alternatively an upper cut out exactly to the size of the pattern could be nailed to the side of the last along the lower edge. The holes in the upper resulting from the nails would then be covered by the rand joining the shoe and the outer sole.

Although not absolutely necessary soaking the leather in water helps shaping the leather especially around the difficult spots like e.g. the ears at the tip of the shoe. 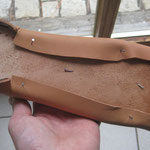 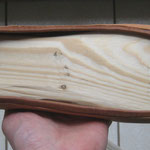 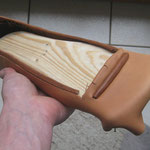 With the upper in place the upper, insole and rand can be sewn togehter. The best place to start is around the middle at the inside. A double running stitch is used to secure the rand in place all around the shoe. See the third picture for details. 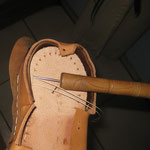 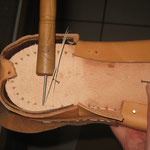 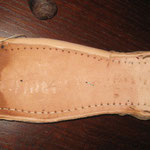 Once the rand is sewn to the upper, the last can be removed. In order to attach the outer sole and protect the seam at the same time, a cut in the shape of the shoe has to be made into the outer sole. This groove takes up the thread, protecting it from being damaged too quickly.

Again the seam is a double one, with the rand folded down over the first so that in the end only the second seam (that unites shoe and outer sole) is visible. When finished the outer sole is wetted with water and the groove hammered flat for better protection of the thread.

Once complete the surplus of the outer sole is cut of parallel to the seam. Finally a strap is added to help fastening the shoe. 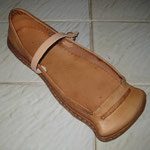 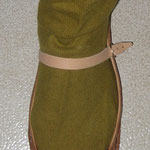 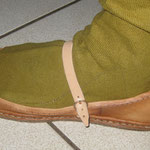