Building a Reconstruction of a 16th Century Shoe - Part 1

It's always the same old story - you see what is around and on the shelves and you find that it isn't like what you would have liked to see and spend money for. So? You start making your own ...

The follwoing pages are intended to show one - not "the" - way to make a pair of Cowmouth (or Kuhmaul, as they are known in German) shoes. In general the techinques used are the same as in the original, but of course there are also details that have to be guessed about as there is just simply more than one way to do something and no way to ascertain which was the common one at a given time.

For a start I prepared the sole pattern after the drawing of the original, using a sole pattern I have created earlier for other (Roman era) shoes. This pattern is slightly (ca. 1cm) longer than my feet actually are to leave some freedom of movement.

Using this sole pattern, I made a simple "3D model" of the shoe in my size, using the method detailed at this site: http://www.florentius.com/calcei-pattern.htm (information as of 22 Feb 2011).
This model when cut up and laid out flat formed the basis of the pattern for the upper.

The most difficult part is getting the length of the front part right. Spreading a 3-dimensional model out flat without losing a bit in some direction generally is not so easy. Try it and you will know what I mean :-) Anyhow it gives a good indication of what the pattern should look like to work out in the end.

As I wanted to make sure I transfered the pattern to leather (cattle, veg-tanned, ca. 1.5-2mm thick) rather generously.

At the same time I also created a basic last. Because of the shape of the toe area, which makes it the broadest part I split the last into three parts to guarantee I would be able to remove it again once the shoe was built.

Note that this last is based on assumption alone on my side. So far I couldn't find any references to finds of lasts for this type of shoe. 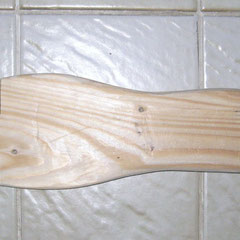 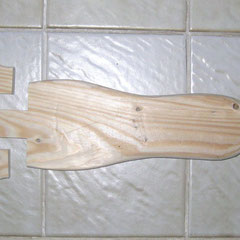 The next thing to do was to sew the two parts of the upper together. This typically is a butted seam, where the sewing runs flesh/edge. Here a detail shot of the seam.

After closing the upper I added a leather band to the top edge of it. This was not done universally, but it seems the majority of shoes had such a top band, which was stitched on with a flesh edge stitch. For the top band itself I used a strip sheep leather (about 15mm wide), but I think any somewhat thin and soft type of leather will do. 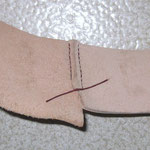 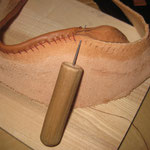 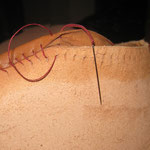